When it comes to the issue of identification versus biology, perhaps no place illustrates the discrepancies better than sports.

Athletes like Fallon Fox, who went from being a third-rate MMA fighter in the men’s division to winning all his bouts but one when he went in the ring with women, show that the body discrepancies between an XY and XX human are not simply due to hormones.

Now, many trans activists claim that the fact that Fox lost one of his bouts—and the fact that several sports authorities have agreed to accept men as women if they complete two years of hormone replacement therapy—proves that there is no difference between hormone-altered men and natal women.

This, of course, is based only on studies that show muscle percentages being similar.  How are bone density, the differences in body shape, and so on supposed to change?  No answer.

The problem becomes clearer when we apply it to an immediately visible aspect of human physiology: height.

No one (except, perhaps, the world’s most dedicated devil’s advocate) would disagree that when it comes to playing basketball, height is an important determining factor of ability, especially at elite levels.  Basketball players in NCAA, NBA, and WNBA teams have historically been much, much taller than the average person.

Enter Gabrielle Ludwig.  Gabrielle is 51 years old and plays for a college basketball team in Northern California.  He previously coached basketball for young people.  The young women sharing a team with him are 18-20 years old.

Ludwig stands six foot six (a height he claims he has after “losing height” because of his transition—apparently he claims he was six foot eight before).  While seeing photographs of Ludwig next to the far-shorter women he plays with make it obvious that this is an old man playing against young women, trans activists are not convinced. 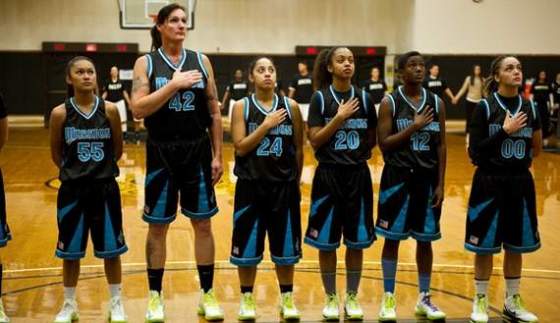 (above: nothing wrong with this picture, say trans activists!)

These activists maintain that because some women have been six foot six, and because trans women (like extremely tall women) are a very narrow subset of the population, no real dent could be made in women’s basketball by transgender players.

But is that true?  Let’s take a look.

At six foot six (198 cm) Gabrielle Ludwig would be a slightly shorter-than-average NBA player. If he entered the WNBA, on the other hand—which he couldn’t, because he doesn’t have the skills and is very, very old for a basketball player—he would be in its top ten or fifteen players of all time.

Ludwig’s height corresponds (based on http://www.disabled-world.com/artman/publish/height-chart.shtml and http://biology.stackexchange.com/questions/9730/what-is-the-standard-deviation-of-adult-human-heights-within-sexes) to a z-score of 2.85, meaning that Ludwig 2.85 standard deviations above the average.  That’s quite tall even for a man—in fact, 99.8% of men in the United States are shorter than him.

What kind of probability does that convert to?  Well, it’s tricky to say, because z-score tables usually cut out at around a score of 3.4.  However, according to wikipedia, a z-score of 5 means that only one in two million people would be expected to be over this range.

One in 500 for men—one in two million for women.  That’s a factor of 4000.  In other words, even if only one in 4000 male-born persons decided to transition, there would be as many trans women standing 6’6 as there are natal women.

As it is, most estimates place the prevalence of transgenderism at roughly 1 in 200 people.

If those estimates are accurate, 6’6 MTFs outnumber 6’6 women by a factor of at least 20.

In basketball, height matters.  I expect to see people commenting right here on this post that height doesn’t matter, because it’s the internet and you can find someone advocating any contrarian position imaginable.  But if that’s your first impulse—to start saying height in basketball doesn’t matter—think about where your ideology has led you to.  At the point where you start denying these other basic realities in a rush to placate your own gnawing doubts or your political allies, you’ve crossed over into cultish, fundamentalist thinking.

There are many more tall (6’2 and above) trans women than natal women, even when you take into account the significantly lower proportion of trans women in the population.  Since basketball and many other sports confer a height advantage, it is likely that allowing MTF people into women’s sporting programs will lead to a slow but definite erosion of women’s opportunities for athletic scholarships and more.

I wonder what it will take for people to recognize this practice as harmful.  Given what some countries have done to ensure Olympic successes (puberty blockers, lies about birth certificates), and given that the IOC now will allow trans athletes to compete as their identified-with sex, rather than their biological sex, I suspect it will be only a matter of time before some nation fields a team of somewhat tall men as nearly impossibly tall women.

You can talk about muscle mass and estrogen all you want, but—once again—reality stares right back with objective, real physical differences that cannot be erased through verbal games and political doublethink.

As NCAA protections for women (you know, the ones who start as girls, discouraged to play sports) erode in favor of “gender-based” protections, remember who’s being protected … and who’s being left behind.

View all posts by culturallyboundgender

15 thoughts on “All The Things You Can’t Deny: Title IX, Trans Women, And the Reality of ‘Neutrality’”