Whether you are new to the world of feminism or not, you have probably heard one of these arguments in favor of accepting identity-based sex/gender* definitions:

Typically, the person arguing in favor of identity-based definitions then begins to list the intersex conditions they know about, and asks “what about them, are you going to tell them they’re not real women?”

I see a number of feminists get flustered by these claims and feel like they don’t know how to respond. I believe it’s because this is an example of something I like to call argumentum ad patriarchum — not because it’s being used to support the patriarchy (though, of course, in this case it is), but because it’s how my father argues when he knows he’s on the back foot and will otherwise lose badly.

In this kind of argument, the opponent has, with a new claim, changed the terms of what they are arguing so boldly that even if their new claim is totally supported, it in no way justifies the original argument.  The point of such an argument being used is simply to get you to a point where you agree they are right about something, and then they can crow and say, “so you do agree, after all, I’m glad we can see things eye to eye about [primary issue that agreeing to the secondary proposition never actually impacted].”

But these sex is a spectrum arguments are sophistry. They are a word game.

The way you can tell is simple. The person making these arguments doesn’t follow it up with, “I’ve got XY chromosomes and CAIS, and I don’t want you to tell me that I can’t identify as a woman.”

Their next move is always to say that if you accept the existence of intersex conditions and sex as a spectrum, you must be willing to accept that identity should now be the defining element that determines all humans’ location on that spectrum.

All the science, all the specific conditions mentioned … it’s the misdirection used by a magician — or a conman. Because these arguments always lead up to “identity,” and intersex conditions are conditions existing in material reality.

Let’s take, by way of example, something we all accept is a spectrum already: visible light. 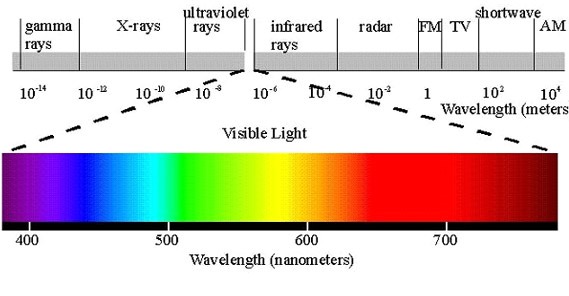 The wavelength of visible light, as you can see, goes from about 350-800 nanometers.

Blue light and red light exist toward the ends of this spectrum, and there is a dramatic range of colors in between. Unlike in the “sex spectrum,” in fact, the middle range of the visible light spectrum contains the majority of categories distinguished by the human eye.

And yet, discoveries of new colors within that spectrum — or the fuzzy boundaries between what we, for instance, perceive as red versus orange — do not mean that yellow is whatever someone identifies as yellow (or believes is yellow with all their heart).  Yellow is a color category that exists in the upper 500 nanometer wavelength range.  You could readily claim that something at 600 nanometers was yellow, or at least yellow-ish, and have a reasonable argument.  But you could not do the same for light with a wavelength of 450 nanometers.

Let’s say that at birth, you were assigned a ribbon you needed to wear in your hair at all times.  These ribbons were red (colors with wavelengths of about 650 nm and up) and blue (450 nm and below). For their whole lives, red and blue ribbon-getters were treated quite differently from one another: red ribbon-getters were a lower social order, expected to primarily serve the needs of the people with a blue ribbon.

Once in a blue moon, though, the dyeing machine had an error during the dye process, and yellow, orange, or green ribbons were produced instead. Tradition dictated they had to be used. For centuries, any children who got a yellow, orange, or green ribbon were simply told they’d received a red or blue ribbon, and when they pointed out any differences between their ribbon and the ones that were actually red or blue, an adult hushed them and told them they were wrong. Since ribbons are very important in their society, they grow up with a deep internal sense of shame over their differences.

The people with orange, yellow, and green ribbons start to complain and band together: shouldn’t they be acknowledged as they are?

At some point, the people with blue ribbons get it into their heads that this is a very fun idea, indeed: in fact, if someone with an orange ribbon — which we used to pretend was red, for the sake of outmoded social norms — can now say “My ribbon is orange, not red!”, why can’t their ribbon be whatever color they identify it as, too?

In fact, they take a good long look at their blue ribbon.  Sure, they say, its surface reflects light at a wavelength of 480 nm.  But they know tons of blue-ribboned people whose ribbons are of even shorter wavelengths: their friend Bill’s ribbon is a very deep blue, almost violet, and all the blue-ribbon people they see in the media seem to have deeper blue ribbons than theirs.

Since ribbon color is no longer falsely regarded a binary, now, they’re ready to make the claim: their ribbon isn’t really blue at all. It’s orange, or maybe actually red.  Maybe it’s always been red, and you just didn’t see it.  If we’re to accept that the orange-ribboned person doesn’t have a red ribbon, after all, we must also accept that a blue-ribboned person can, if they want to.

But nothing about the quest of people with green, orange, and yellow ribbons would mean that a person with a light blue ribbon actually had one that was yellow, or orange, or red. It’d be reality-denying and insulting to the intelligence of others for a person with a blue ribbon to insist everyone pretend his ribbon had always been red.

In a more reality-based context, some sheep being born with ambiguous genitalia and infertility issues doesn’t mean a ram can suddenly be a ewe upon request.

Sex spectrum arguments are irrelevant to the idea of identity-based sex and gender definitions. They are a deliberate time-wasting tactic engaged in by mansplainers, who jump in with an “Aaaaactually…” and then use this red herring to confuse the argument and claim victory.

Bookmark this post — and the next time you hear someone making this argument, send them this way.

* – Now that MTFs consider themselves “adult human females,” and of the female sex, they have again neatly collapsed the two into a single category for the purpose of definition, which has proven disastrous for sex protections in, for instance, provisions of the UK’s newly proposed GRA, as well as for single-sex accommodations in sports and facilities.

View all posts by culturallyboundgender

10 thoughts on “On Sex, Ribbons, and Why Cows Still Aren’t Bulls”